Working with ADR Cues is the most important task in ADR Master. This article will discuss the different ways to create cues within ADR Master and also discuss how to import cues from text files in one of the supported formats.

There are two different ways to create ADR Cue events in ADR Master - either in standalone or by using Pro Tools. The easiest is to create them in standalone mode as it does not require other applications opened.

To create a new cue, go to the first frame of the cue you want to create (the beginning of the line) using the left/right arrow keys and press the "A" key to create a new ADR Cue event. ADR Master will create a new ADR Cue event with the default duration you have set in the preferences. Alternatively, you can also drag a selection in the timeline before pressing "A" to get a new ADR Cue event with both the start and end timecode set to the selection boundaries. You can then modify the event boundaries by dragging the borders of the event in the event track in the main window, by dragging the timecode modifiers in the event list or properties tab (shown by double-clicking the event) or by entering it numerically (event list or properties tab). Another option is locating to the start and end frame and selecting "Set Playhead As Current Event's In Point" / "Set Playhead As Current Event's Out Point" from the Event menu respectively. 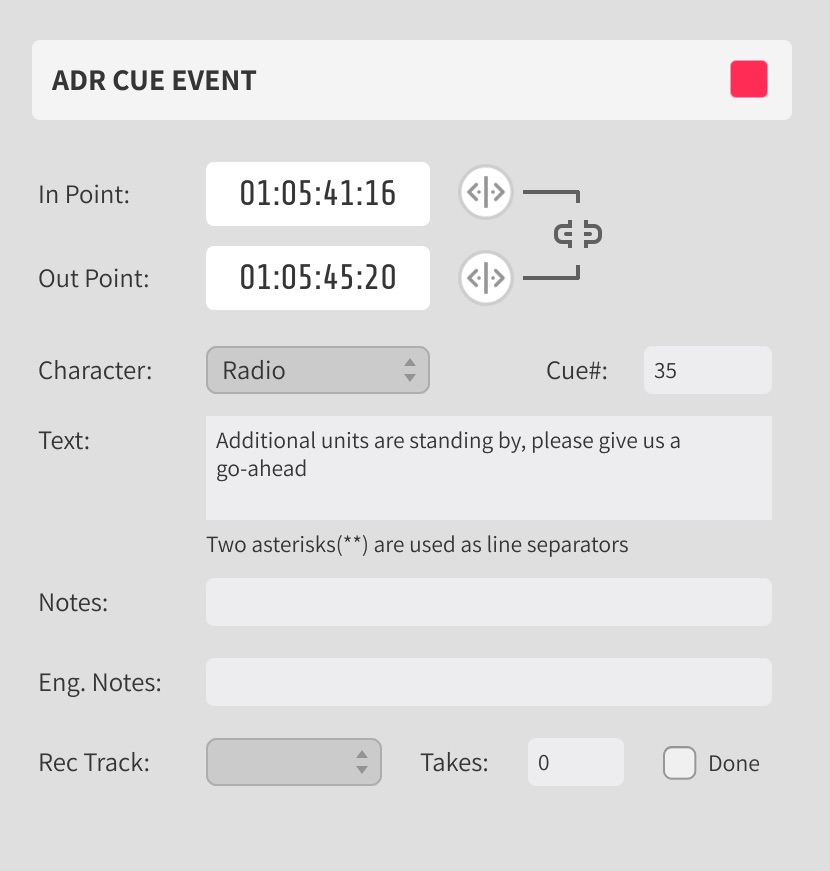 Another option to create ADR Cues in ADR Master is using the timeline selection from Pro Tools. This requires that ADR Master and Pro Tools are connected using MTC/MMC and the Accessibility API as discussed in this article. 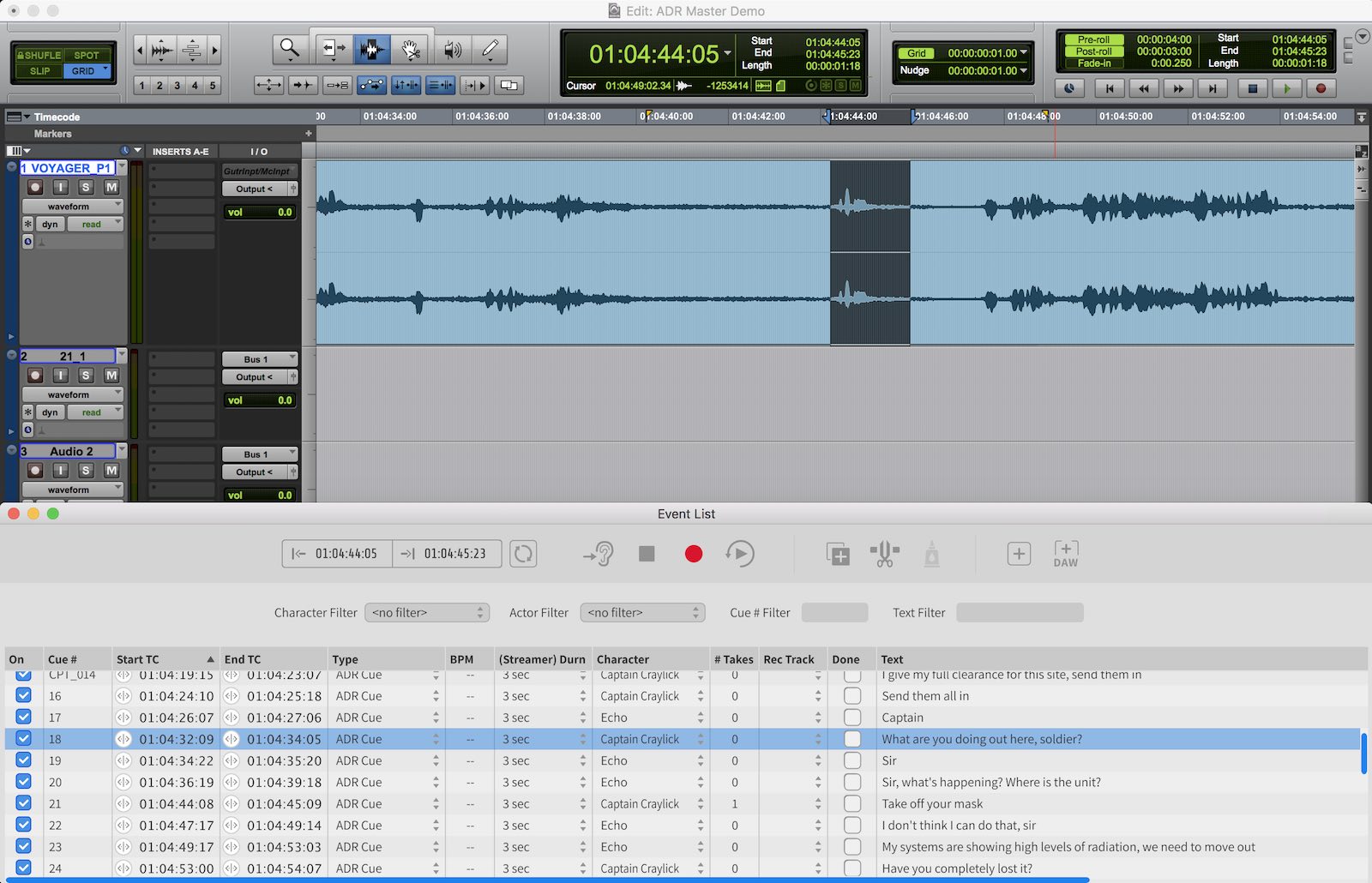 If both applications are setup correctly, creating new cues is easy. Just drag a timeline selection in Pro Tools and choose "New Event from DAW Selection" from the Event menu in ADR Master. Alternatively, click the corresponding button in the event list or use the system-wide shortcut key Cmd+F7. ADR Master will create a new ADR Cue event using the selection boundaries from Pro Tools as in and out point of the event.

Many engineers prefer creating their cues directly within Pro Tools using region groups and only import them into ADR Master for the actual Pro Tools-integrated recording process. When cueing in Pro Tools, you can share you ADR cues directly as part of the Pro Tools session. If re-conforms are necessary, the ADR cues will be reconformed using the same tools (e.g. the fabulous Conformalizer) also used for audio and video regions as the cues are only regions. Although CSV files exported from ADR Master can also be re-conformed using e.g. Conformalizer, it might be more intuitive to do it all within the DAW as you get more visual feedback on what's happening.

It's perfectly fine to create your cues as region groups within Pro Tools even if you want to record them using ADR Master. You can simply export them from Pro Tools using the Pro Tools Session Info export and import them into ADR Master easily.

As you can see, the region names contain the line text (and an optional comment) and the track names contain information about the character which we will discuss shortly. The cues for each actor are contained in that actor's track respectively.

You can encode different information in both region and track names using simple formatting that employs the use of certain generic separators. When importing the Pro Tools session info into ADR Master, ADR Master will then decode the contained information the same way other apps like SoundsInSync EdiCue does.

The region name can contain the cue text and an optional comment.

When you're done creating your cues in Pro Tools using the syntax described above, you can transfer the cues to ADR Master. To do that, just export Pro Tools' session info as a text file. Select to File->Export->Session Info as Text. You will see this window (in PT 12): 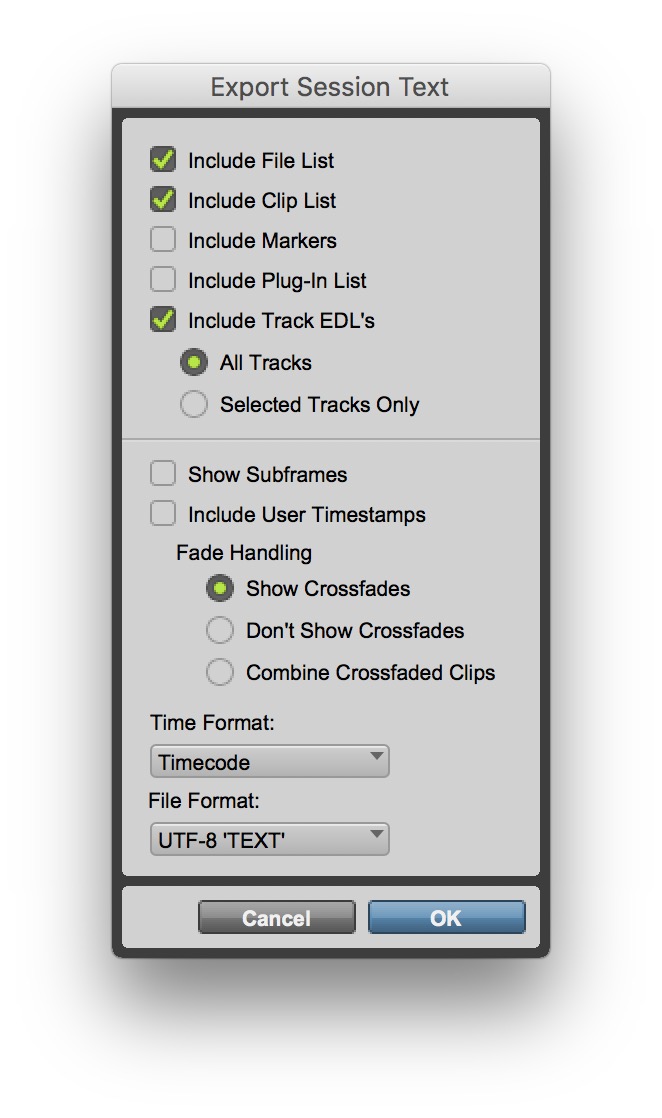 Make sure to select "Timecode" as the time format. We recommend to use "UTF-8 'TEXT'" as the "File Format" as this also supports non-ASCII characters like Umlauts and other non-US character sets.

To import an ADR cue file stored in one of the formats listed above, select File -> Import Cues from File. When importing Pro Tools Session Info files, a dialog will appear letting you select the tracks you want to import: 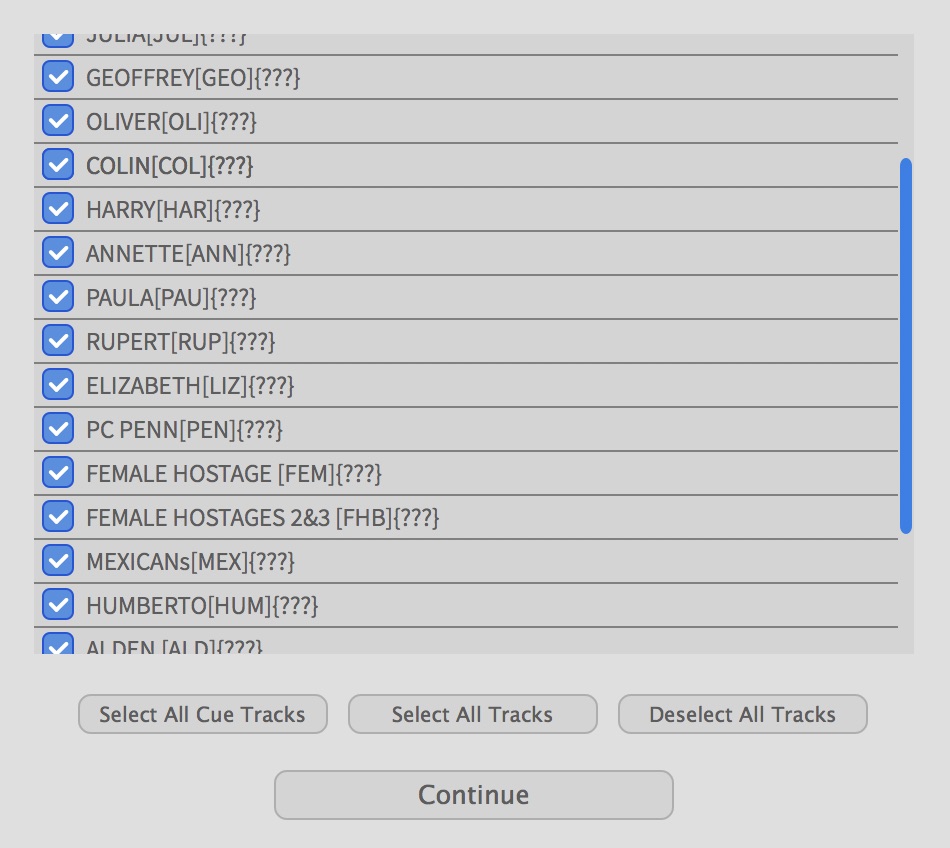 Select all tracks you want to import and click the Continue button at the bottom. The actual cue import window will appear. The window is separated into two sections. The top section with the actual cues and the bottom section with a number of import related settings.

When you import cues, ADR Master will parse the file and display the content in a table-like manner. For most formats ADR Master can clearly identify how the information contained in the file needs to be used as it's clearly defined where information about the actor, text, notes etc. can be found for each cue. For other formats like CSV for example, this is not the case as CSV is just a generic text file format. ADR Master can only guess what information it may contain (using keywords in the first line of the document), but this may not always work properly.

Hence, the table has a dropdown menu on each column which lets you map the information this column contains to a property for each event(e.g. start timecode, text, comment...). For easily-parsable formats like e.g. ADR Studio XML these dropdown menus will be pre-selected with what ADR Master thinks is correct. However, you can also change that mapping if you see fit.

In all cases, it's important that one column is set as "Start TC" column. If the end timecode is missing, ADR Master will just apply the default cue length set in the preferences. Text, comment, actor... are only additional information per cue which are desirable but not necessary to import the cues in the first place. Start TC is mandatory and must be mapped and the column must contain valid timecode values to continue importing.

The bottom half of the window contains a numer of import related settings.

To finally import the cues to your current timeline, click the"Import Events" button at the bottom.